10 Best Places to Visit in Ireland

There are so many wonderful places to visit in Ireland everyone who’s ever visited will have their own favorites and recommendations from the windswept Cliffs of Moher to the rain-soaked Aran Islands. If ancient history is your thing, Ireland has plenty of it. There is more to Ireland than countryside and rocks, as any number of attractions in Dublin, such as Trinity College and the Guinness Storehouse in Dublin, make clear. Narrowing the list down to 10 is quite a challenge but it reflects an array of tourist attractions from all corners of Ireland with something for everyone. 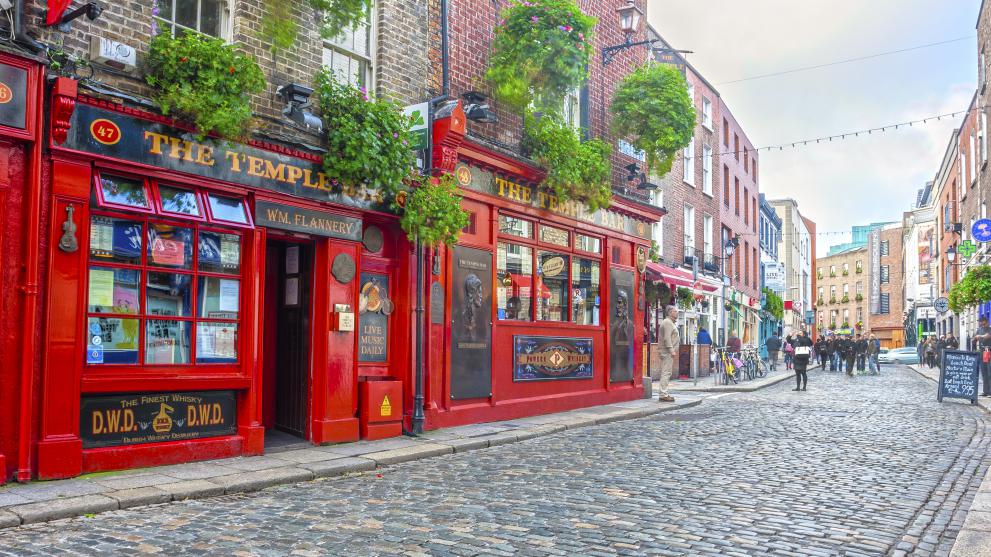 Dublin is both the largest city and capital of Ireland located near the midpoint of Ireland’s east coast, at the mouth of the River Liffey and at the center of the Dublin Region. The city has a world-famous literary history, having produced many prominent literary figures, including Nobel laureates William Butler Yeats, George Bernard Shaw and Samuel Beckett. There is a vibrant nightlife in Dublin and it is reputedly one of the most youthful cities in Europe with estimates of 50% of inhabitants being younger than 25. The area around St. Stephen’s Green, especially Harcourt Street, Camden Street, Wexford Street and Leeson Street is a center for some of the most popular nightclubs and pubs in Dublin. The internationally known area for nightlife is the Temple Bar area just south of the River Liffey. 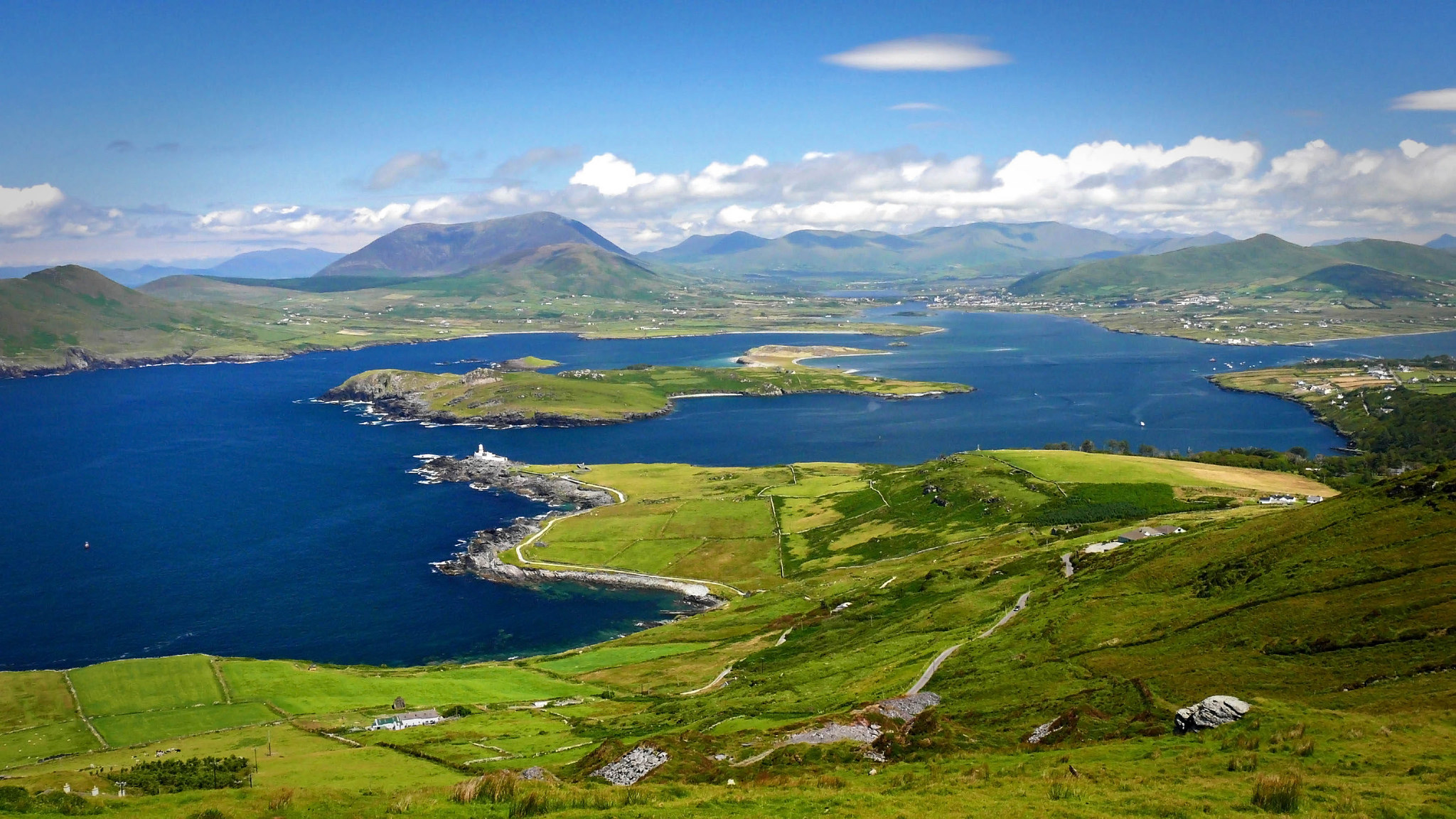 Admire breathtaking vistas of mountains, cliffs and beaches on Ireland’s most popular drive, the 100-mile Ring of Kerry. Starting from Killarney, the drive is full of historical markers and points of interest too numerous to mention. There is also an established walking path named The Kerry Way, which takes its own route, and a signposted Ring of Kerry cycling path which uses older quieter roads where possible. The Kerry Way roughly follows the scenic driving route of the Ring of Kerry. “The Ring” is a popular day trip and numerous bus companies offer trips during the summer months. Interesting fact; as the narrow roads make it difficult for tour coaches to pass, all tour buses run in an anti-clockwise direction. 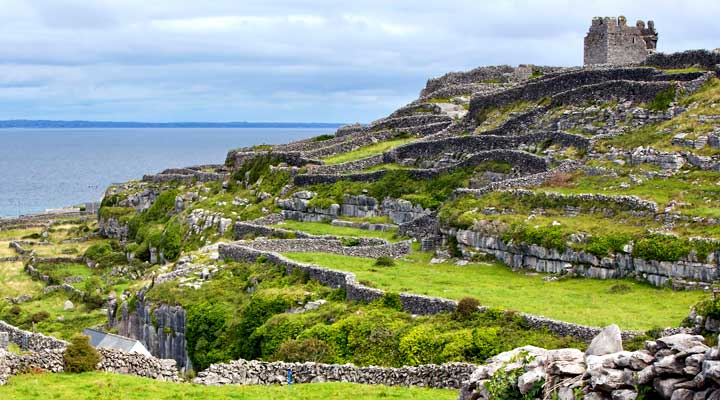 The Aran Islands are a group of three islands located at the mouth of Galway Bay, on the west coast of Ireland. Irish is a spoken language on all three islands and is the language used naming the islands and their villages and townlands. Take a short ferry ride to Inis Mor, the largest of the three Aran Islands, and island rich in the language, culture and heritage of Ireland, unique in its geology and archaeology and in its long tradition of gentle hospitality. Here is a place to sense the spirit of Gaelic Ireland, to touch the past, but with all the comforts and facilities of the present. Aran will take you back to an Ireland of Celts and Early Christians. This is an island of great peace and tranquility, but it is also an island of great fun and activity. 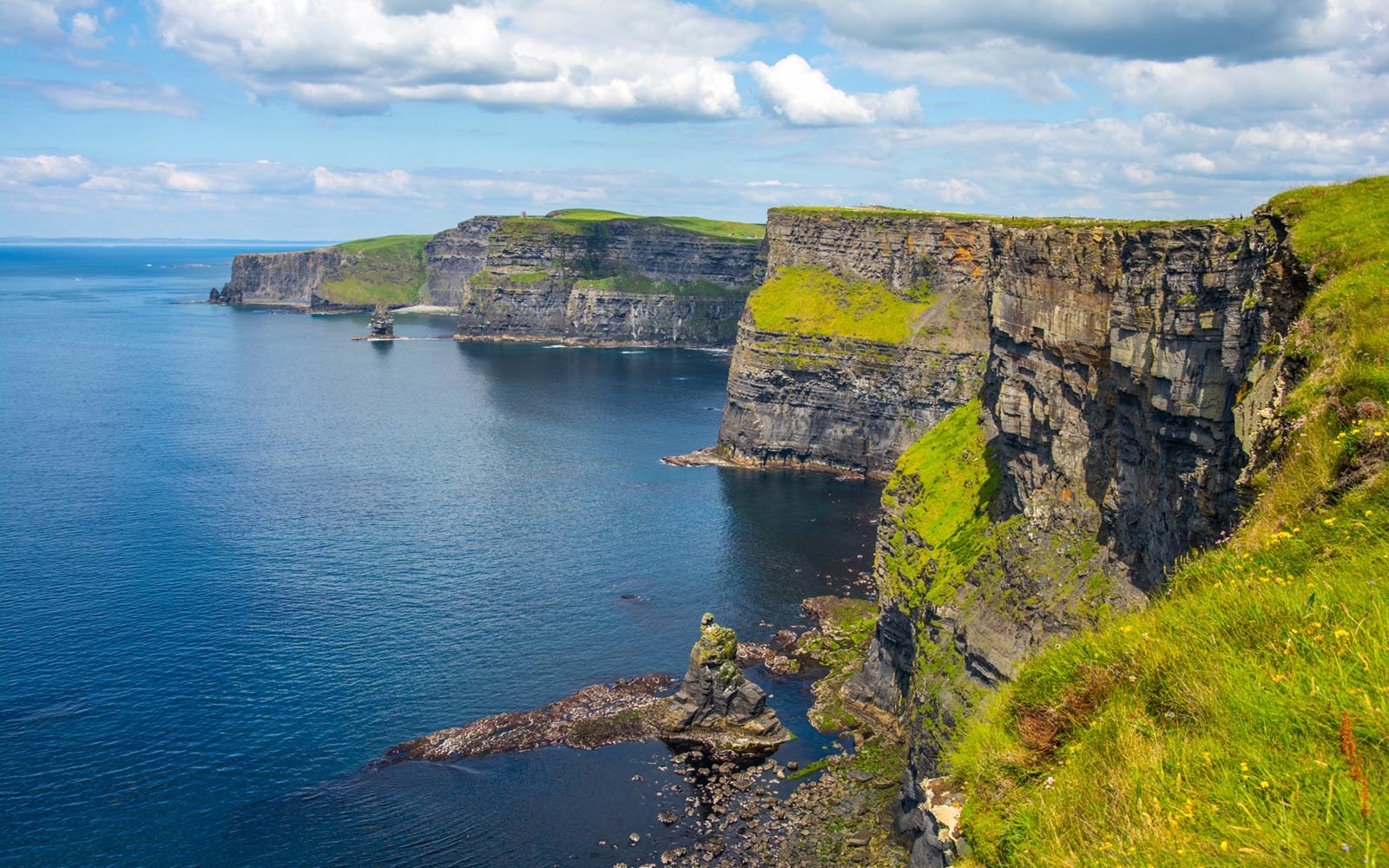 The Cliffs of Moher are located in the parish of Liscannor at the south-western edge of The Burren area near Doolin, which is located in County Clare, Ireland. The cliffs rise 394 ft. above the Atlantic Ocean at Hag’s Head, and reach their maximum height of 702 ft. just north of O’Brien’s Tower, five miles away. The cliffs boast one of Ireland’s most spectacular views. On a clear day the Aran Islands are visible in Galway Bay, as are the valleys and hills of Connemara. The cliffs consist mainly of beds of Namurian shale and sandstone, with the oldest rocks being found at the bottom of the cliffs. One can see 300 million year old river channels cutting through the base of the cliffs. The Cliffs of Moher are amongst the most impressive places to see in Ireland, and are widely considered to be Ireland’s top tourist attraction, drawing almost one million visitors a year.

There are so many things to see, to do, to explore, to experience on the Dingle Peninsula . . . from almost 2,000 archaeological sites, to more walking than you could fit into a year. There is no other landscape in western Europe with the density and variety of archaeological monuments as the Dingle Peninsula. It is impossible to visit the Dingle Peninsula and not be impressed by its archaeological heritage. The peninsula exists because of the band of sandstone rock that forms the Slieve Mish mountain range at the neck of the peninsula, in the east, and the unnamed central mountain range further to the west. The Conor Pass, which runs from Dingle on the southern end of the peninsula towards Brandon Bay and Castlegregory in the North, is the highest mountain pass in Ireland. 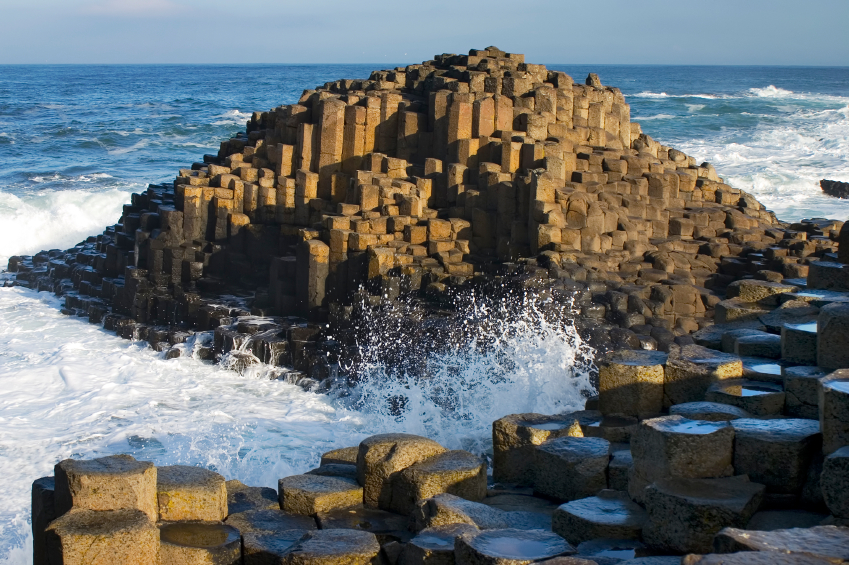 The Giant’s Causeway is an area of about 40,000 interlocking basalt columns, the result of an ancient volcanic eruption. It is located on the northeast coast of Northern Ireland, about two miles north of the town of Bushmills. The tops of the columns form stepping stones that lead from the cliff foot and disappear under the sea. Most of the columns are hexagonal and the tallest are about 36 ft. high.The Giant’s Causeway is today owned and managed by the National Trust and it is the most popular tourist attraction in Northern Ireland. Legend has it that the Irish giant Finn McCool built the causeway to walk to Scotland to fight his Scottish counterpart. 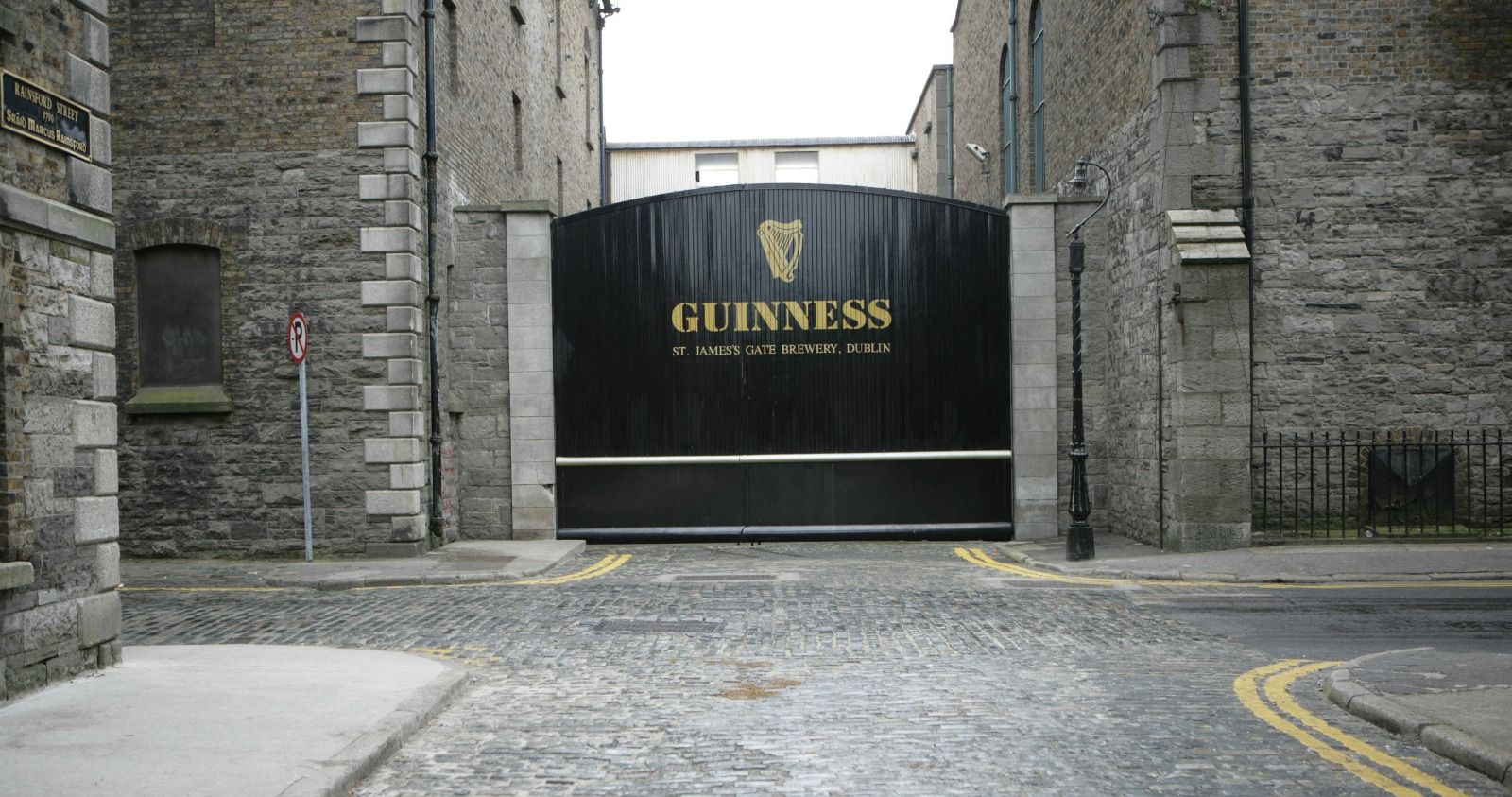 The Guinness Storehouse is located in the heart of the St. James’s Gate Brewery in Dublin, and is, Ireland’s No. 1 international visitor attraction. Since opening in November 2000, Guinness Storehouse has attracted over 5 million visitors from every corner of the globe. The Storehouse is laid out over seven floors surrounding a glass atrium taking the shape of a pint of Guinness. Arthur Guinness was born in 1725 near Dublin in the town of Celbridge, county Kildare where his father, Richard Guinness, was a Land Steward. The brewing industry in Dublin at that date was suffering because English beer was taxed less severely than the home-produced product. Arthur decided to acquire what was then a small, disused and ill-equipped brewery at St James’s Gate. A 9,000 year lease was signed on 31 December 1759, and the brewing, of ale initially, began and the rest as they say…is history. 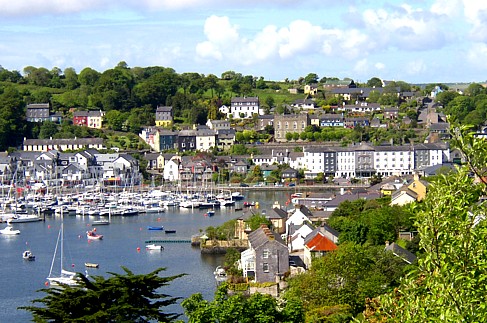 Drive to Kinsale, a delightful old town on a narrow inlet of the sea. Formerly a fishing and merchant town, today it is popular for sailing and gourmet food. Join a local guide for a short walking tour to see some historic places. Kinsale can easily claim its place amongst Ireland’s most historic locations for this has been a center of population, commerce, trade and fishing far beyond memory and record. The Town nestles between the hills and the shoreline, a maze of narrow streets, never far from the water and little changed in many hundreds of years. When the RMS Lusitania was sunk by a German U-boat on May 7, 1915, some of the bodies and survivors were brought to Kinsale and the subsequent inquest on the bodies recovered was held in the town’s courthouse. A statue in the harbor commemorates the effort. 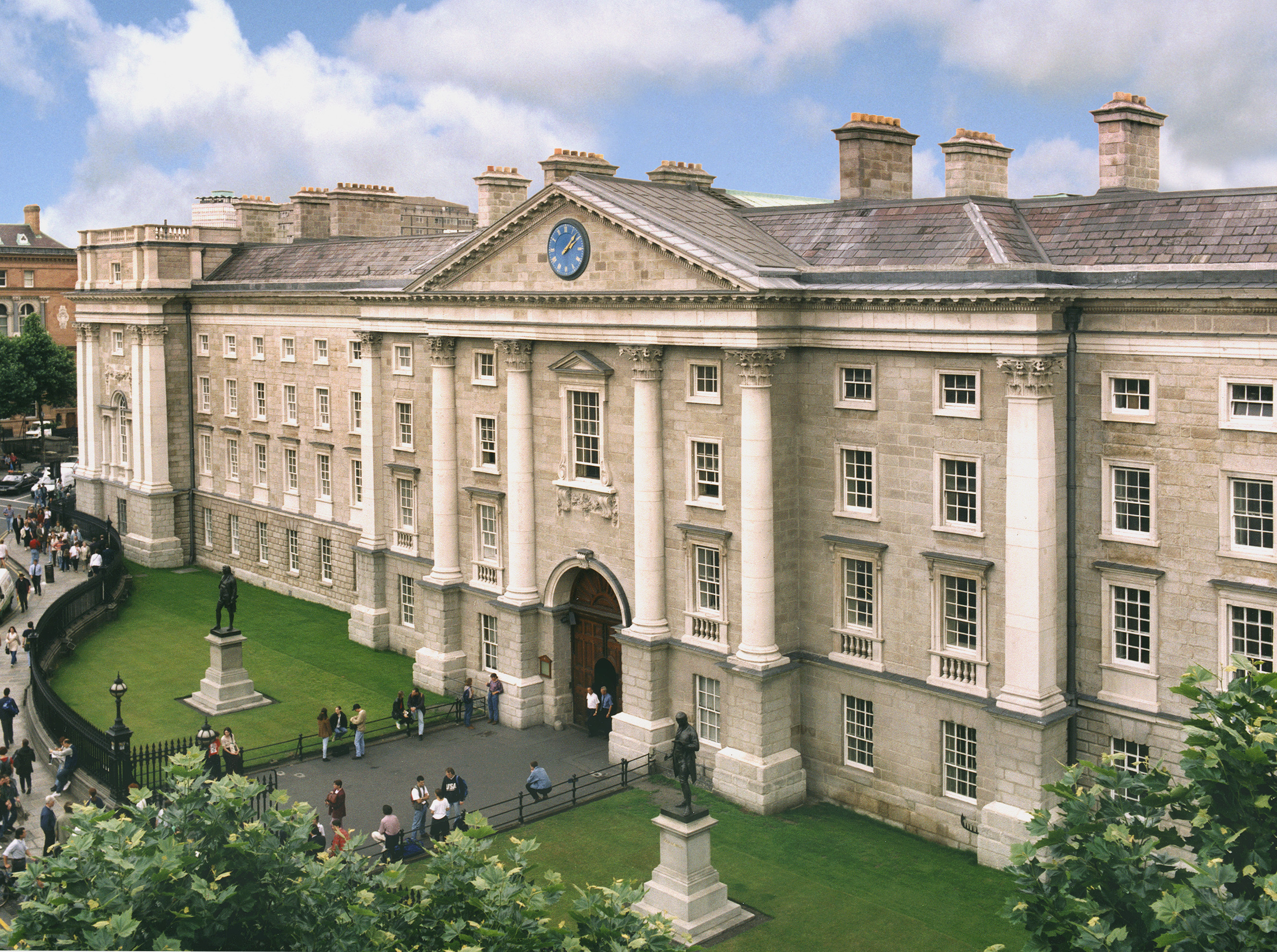 Trinity is located in the center of Dublin, on College Green opposite the former Irish Houses of Parliament. The campus occupies 47 acres with many buildings, both old and new, ranged around large courts. The Library of Trinity College is a copyright library for Ireland and the United Kingdom, containing over 4.5 million books and significant quantities of maps, manuscripts and music. The Book of Kells is by far the Library’s most famous book and is located in the Old Library. The Book of Kells is widely regarded as Ireland’s finest national treasure. Transcribed by Celtic monks around the year 800, it contains the four Gospels of the New Testament in Latin, and is a spectacular example of the tradition of illuminated manuscripts. 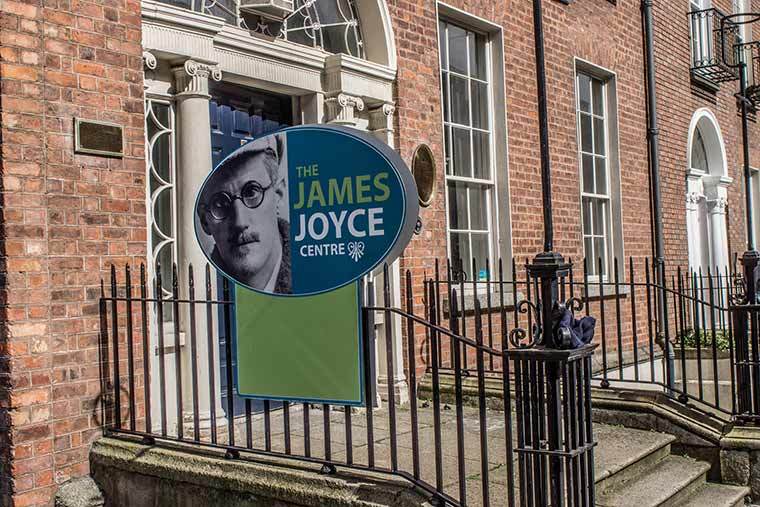 James Augustine Aloysius Joyce 1882 –1941 was an Irish expatriate writer, widely considered to be one of the most influential writers of the 20th century. He is best known for his landmark novel Ulysses and its controversial successor Finnegans Wake. Although he spent most of his adult life outside Ireland, Joyce’s psychological and fictional universe is firmly rooted in his native Dublin, the city which provides the settings and much of the subject matter for all his fiction. The Centre is situated in a restored 18th-century Georgian townhouse at 35 North Great George’s Street Dublin. On permanent exhibit is furniture from Paul Leon’s apartment in Paris, where Joyce wrote much of Finnegans Wake, and the door to number 7 Eccles Street, home to Leopold Bloom, one of the most famous addresses in literature.