With so many historically significant things to see and do, it can be daunting to narrow down a list of the best Washington DC landmarks. From the Jefferson and Lincoln Memorials to the iconic Washington Monument, these are some of the many important landmarks in Washington, DC.

Start your capital trip with one of the top historical sites in Washington, DC – The White House. You’ll need to jump through a couple of hoops to secure your spot inside 1600 Pennsylvania Avenue, so plan ahead. Submit a public tour request through your members of Congress three months in advance and no less than three weeks before your visit. Once inside, you’ll get to see the public rooms of the East Wing, the State Dining Room and the China Room and get a view of the beautiful White House Rose Garden. 1600 Pennsylvania Avenue NW, Washington, DC 20500 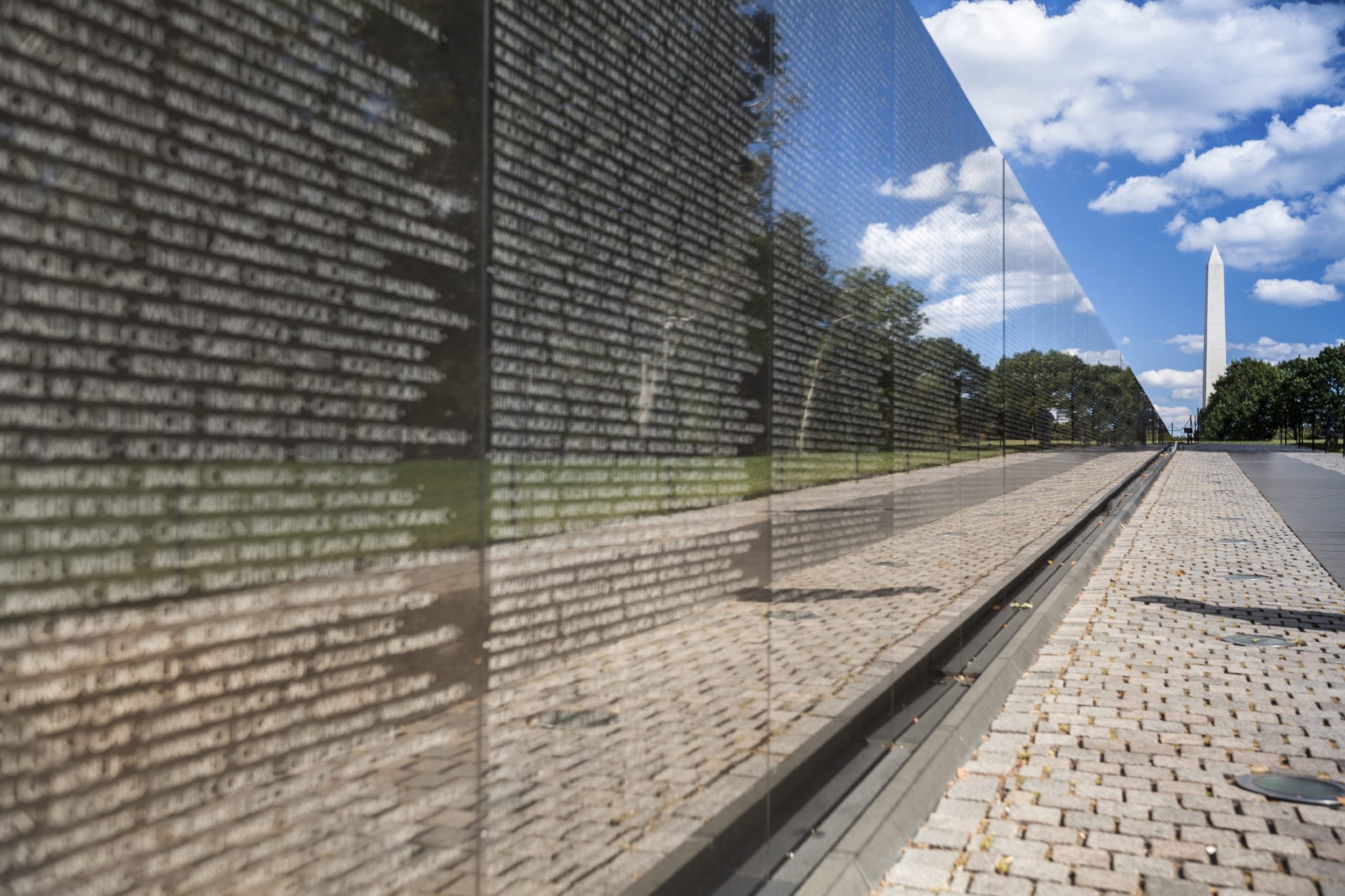 Known as “the Wall,” the Vietnam Veterans Memorial remains one of the most somber and visited landmarks in Washington, DC. The long black-granite wall is emblazoned with the names of more than 58,000 Americans who gave their lives in the Vietnam War. The names are ordered by the date they passed away, not alphabetically. There are three distinct sections: the Three Soldiers Statue, the Vietnam Women’s Memorial and the Vietnam Veterans Memorial Wall, which holds 58,272 names of soldiers who gave their lives or were MIA during the war. 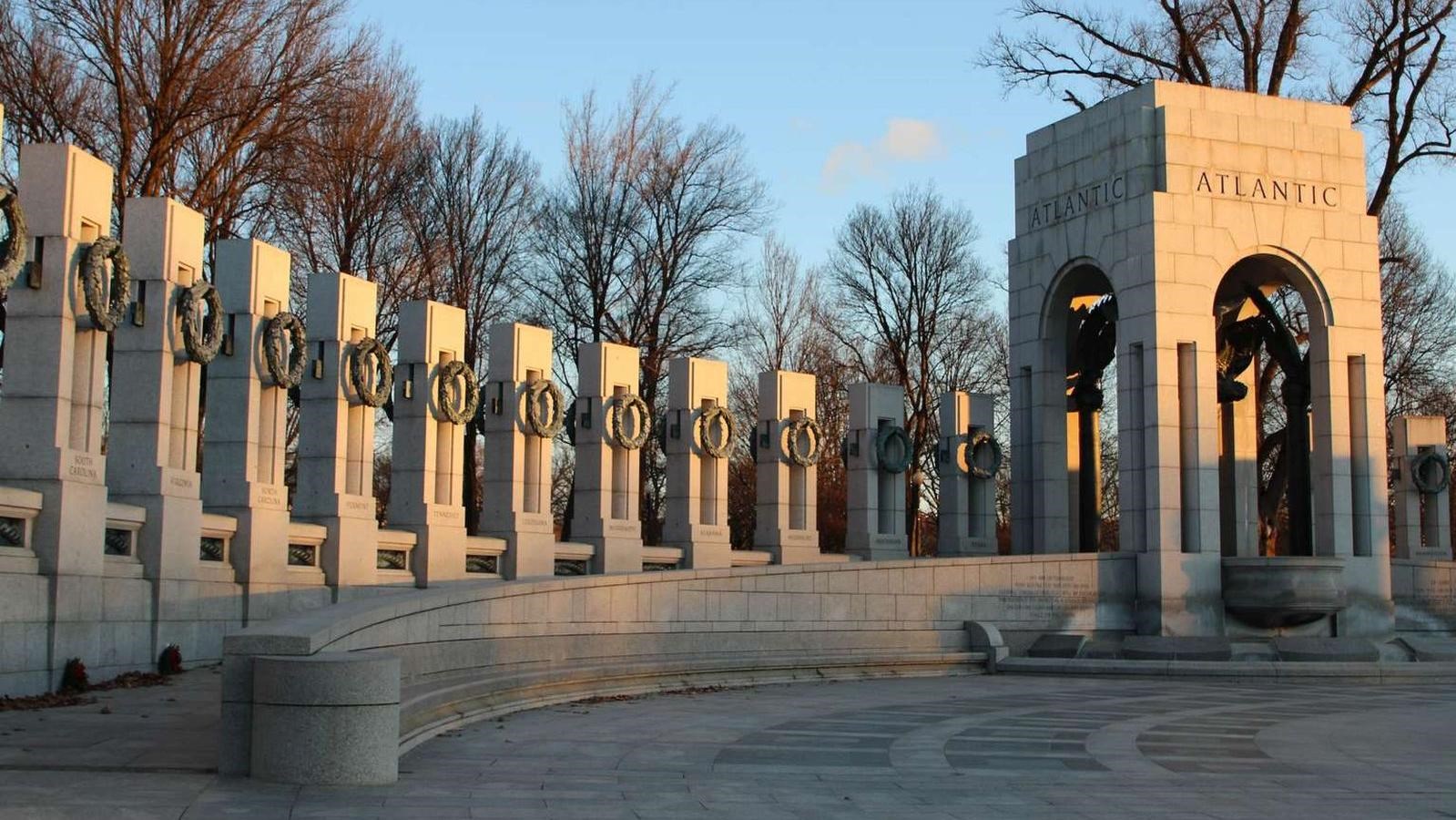 The World War II Memorial is one of the must-visit Washington DC landmarks that honors America’s “Greatest Generation” with 56 pillars symbolizing states and territories, as well as Washington, DC, that participated in the war. These stone and bronze sculptures recognize the Americans – 16 million members of the Armed Forces of the United States of America, those on the home front and the sacrifice of 405,399 Americans – who helped restore freedom and end tyranny around the world. Open to the public 24 hours a day; the Memorial sits on the National Mall at the east end of the Lincoln Memorial Reflecting Pool. 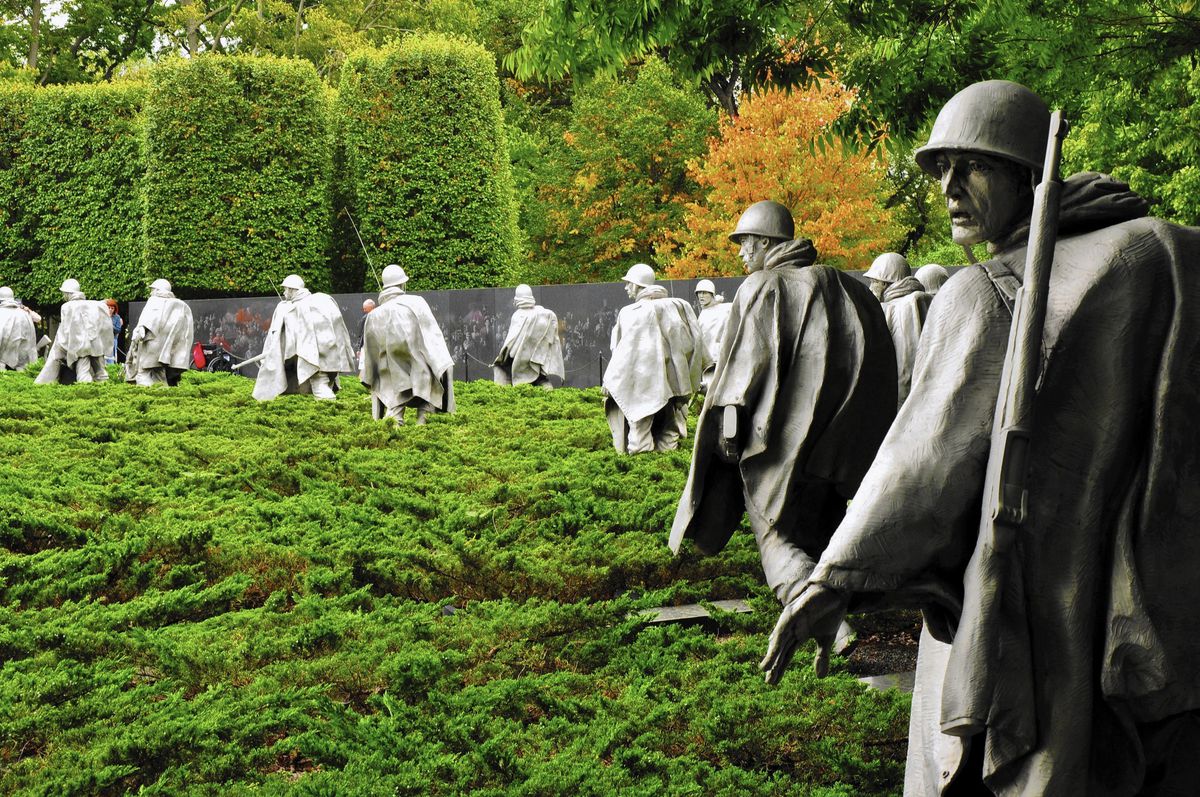 Another sobering Washington DC landmark, the Korean War Veterans Memorial, is located on the eastern side of the Mall. It pays tribute to the 1.5 million Americans who served during “The Forgotten War.” The memorial itself is comprised of 19 stainless-steel soldier statues, set as if in combat and placed to appear as if marching toward an American flag. Nearby, a long granite wall honors the unnamed troops who fought in the war. Take time for quiet reflection at the Pool of Remembrance. Look, too, for the Mural Wall, where you’ll find nearly 2,500 photos of individuals who served in the Korean War. 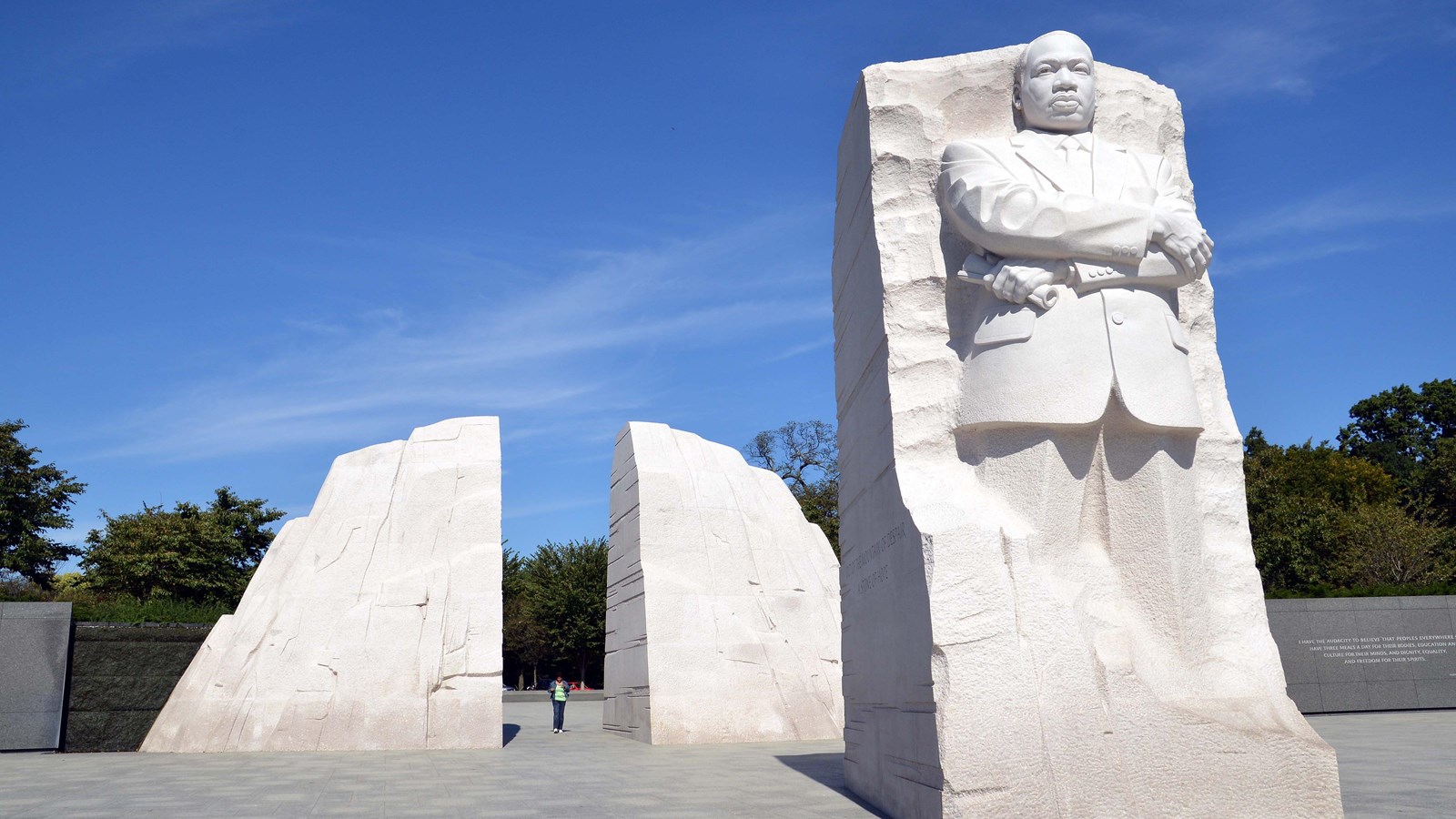 Commemorate America’s greatest Civil Rights Movement leader at the Martin Luther King Jr. Memorial, sculpted by Master Lei Yixin. The concept for this historic site in Washington, DC was influenced by a line from King’s “I Have a Dream” speech: “Out of the mountain of despair, a stone of hope.” The memorial sits on four acres along the Tidal Basin, next to the Franklin Delano Roosevelt Memorial and shares a sightline between the Lincoln and the Jefferson memorials. As a nod to the Civil Rights Act of 1964, the official address of the memorial is 1964 Independence Avenue SW. It is Washington, DC’s fourth memorial to honor a non-president and the first to honor a man of color. 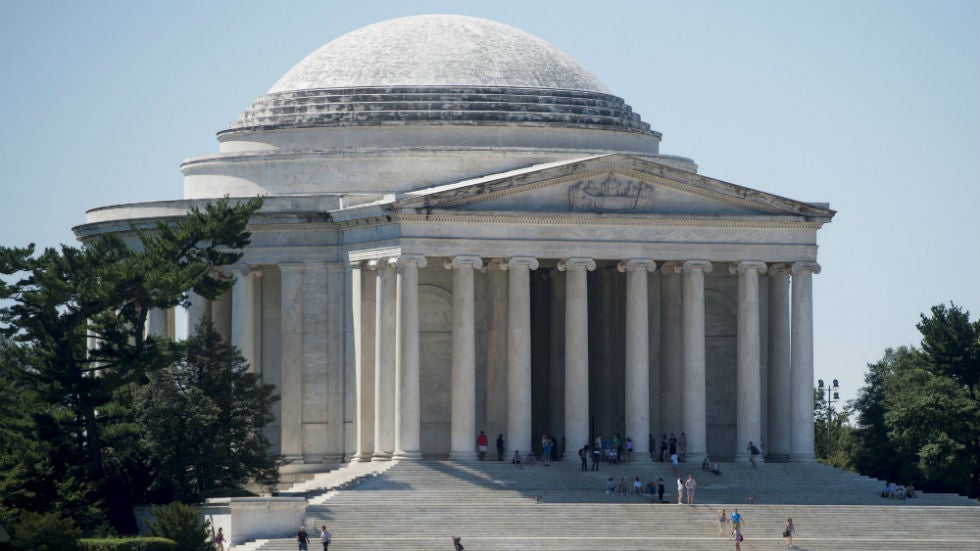 One of the most iconic Washington, DC landmarks, the Thomas Jefferson Memorial, was modeled after the Pantheon in Rome. A low dome is supported by 54 Ionic columns, creating a dramatic spot for the 19-foot bronze statue of Jefferson, the third president of the United States. The monument stands at the far edge of the Tidal Pool in a straight line with the White House. John Russell Pope’s design reflects Jefferson’s love of classical architecture, seen at Monticello and the University of Virginia Rotunda. Inside the monument, look for excerpts from Jefferson’s famous speeches, as well as the Declaration of Independence.

Among the most-visited landmarks in Washington, DC is the emblematic Washington Monument, built to honor George Washington. Once the tallest building in the world at 555 feet, this tribute to the commander-in-chief of the Continental Army and first president of the United States remains the world’s tallest stone structure and obelisk. Today’s visitors can whisk to the top of the 50-story monument via a minute-long elevator ride, during which they’ll watch a video from the National Park Service on what to expect during their visit. From the top, it’s possible to see almost 25 miles in every direction. 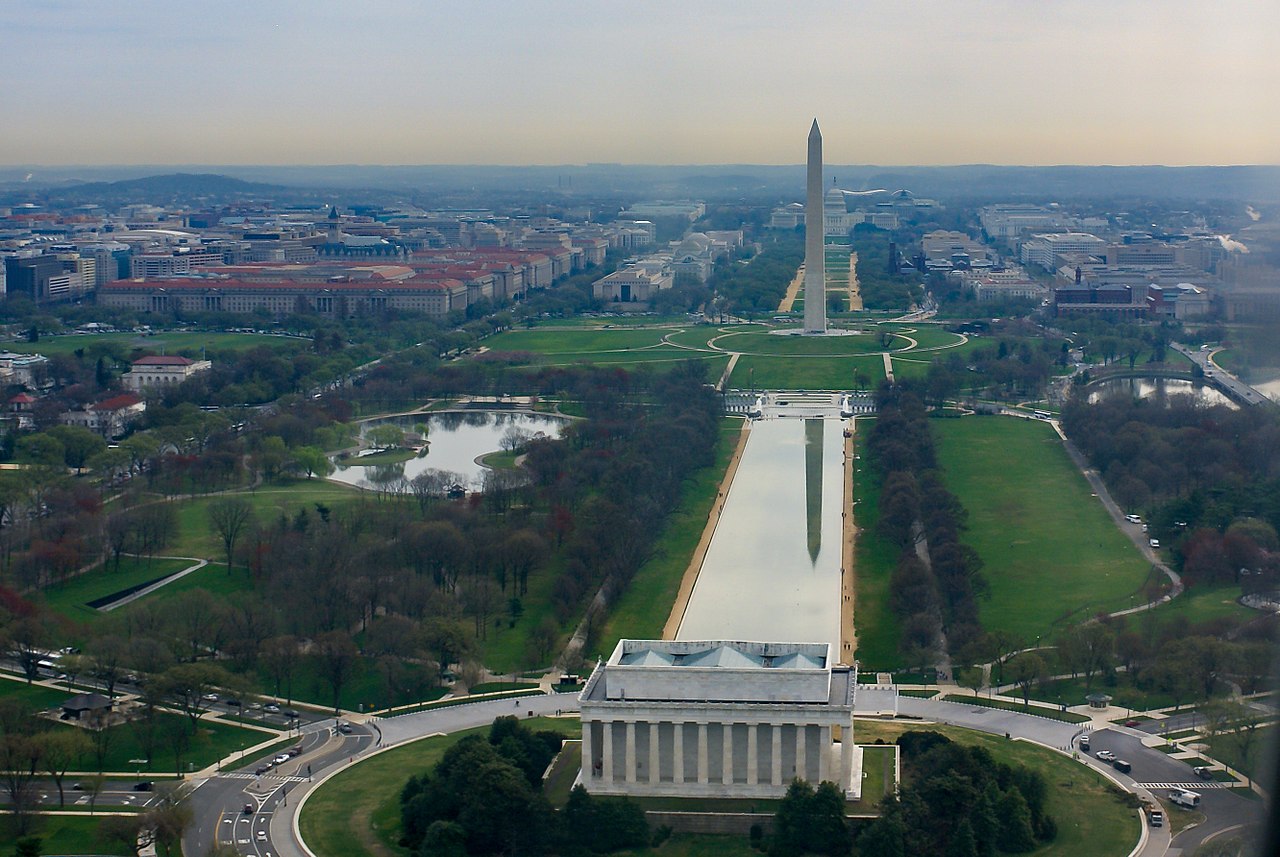 Encompassing countless memorials and monuments that honor American presidents, heroes and forefathers, the National Mall continues to be the United States’ most-visited landmark. The Park runs more than two miles from the Lincoln Memorial on the west to the US Capitol in the east. The center point is the Washington Monument. As you tour Washington, DC, you’ll realize you’re spending a lot of time on the Mall, visiting the monuments and getting from one place to the next. This is where the annual Independence Day celebration takes place, as well as various Smithsonian festivals throughout the year. 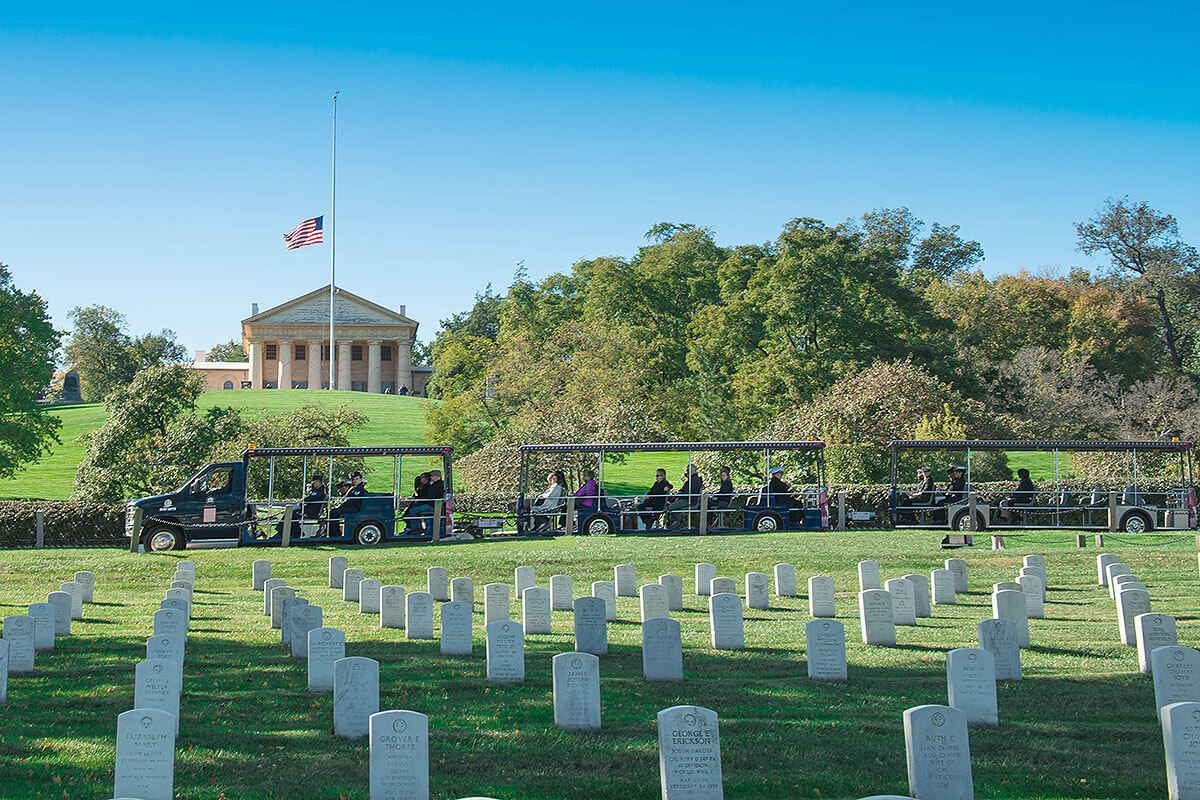 High on the hill above Arlington National Cemetery sits the Greek Revival-style Arlington House, the former home of General Robert E. Lee and his wife, Mary Anna Custis Lee. With its huge Doric columns and covered entrance porch, the house stands as a lasting memorial to Lee for his role in promoting reunion after the Civil War. While you’re here, start your Arlington National Cemetery at the welcome center, where you’ll find interesting exhibits and maps useful in touring this Washington, DC landmark. You can visit the John F. Kennedy gravesite and the Tomb of the Unknown Soldier, witness the Changing of the Guard and explore the Memorial Arboretum. 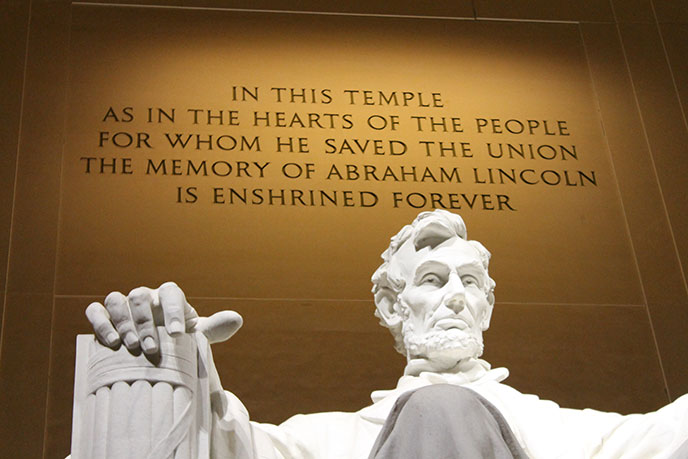 Truly one of the most glorious monuments in America and a top Washington, DC historical site, the Abraham Lincoln Memorial is as inspiring as it is imposing. One of the top-visited National Park Service sites in the country, the huge neoclassical memorial features a 19-foot statue of Lincoln presiding over the Reflecting Pool and the Washington Monument in the distance. Look for the words of Honest Abe’s two most famous speeches etched into the walls of Henry Bacon’s impressively designed monument. Thirty-six of the 38 Doric columns represent the number of states in the Union at the time of Lincoln’s death. If possible, visit the memorial after dark, when the crowds are fewer and the monument is at its most atmosphere.